Road Out of Hell

The Story of Operation Savannah

Operation Savannah was the South African Defence Force's 1975–1976 covert intervention in the Angolan War of Independence. I was one of the young South African men doing their compulsory National service when this covert operation was ordered. My story is dedicated to the men who lost their youth in the months that followed.

Every day, multiple families will learn that their; son or daughter, husband or wife, brother or sister, lost all hope in tomorrow and took their own life. Leaving a trail of heart break and wreckage that is impossible to quantify. 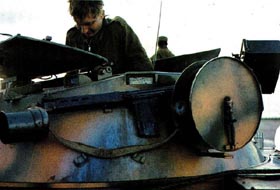 I have seen and done things that civilized people are simply not designed for. Mercifully for me, the safety mechanism's encoded into my DNA engaged, my "inner self" fled from my body and found refuge in some "other" detached place.

My brain was morally injured. After my National (military) service, I replaced the adrenaline rush of combat with extreme sports, financial roulette, inappropriate relationships, sexual trysts and unhealthy eating.

The occasional binge became frequent excessive drinking, which turned into a drinking problem, which progressed into full blown alcoholism.

The statistic of 22 suicides each day may be high, but we should not underestimate the struggle of living. Each waking moment is filled with guilt and shame. Every dream with the images of the dead. Life is a political conspiracy. Hope is lost. I have been there and I pray to never forget Raymonds simple words "you do not need to live like this any more".

The brain injuries caused from "spiritual bullets" are NOT visible. You cannot see, "wracked with shame" at the atrocities we committed. Guilt lives deep inside us. It is relentless. It eats at our very souls. By the time our injuries are diagnosed it is often too late. One of the few solutions we have that works - conversation link --> is to share our stories.

When will we accept that a moral injury is also a traumatic injury?  Are we willing to understand that neither a missing leg, nor an injured brain can be replaced. Yes there are emotional prosthetics, yes it is possible to live amazingly productive lives again and yes we are all accountable for learning to overcome our circumstances. But any person who has suffered a moral injury needs compassion, understanding and specialized help.

On May 5th 2014 my elder daughter Stephanie lost her eighteen month battle against cancer. Living with the knowledge that Stephanie needed to forgive me on top of all she went through is part of my struggle. Fathers are meant to be there for their children. I had been missing for Stephanie, and her sister Victoria, when they were young and needed a father.

Operation Savannah was founded to provide education and emotional support to any person suffering from a moral injury. In 2014 this mission was expanded to include support for parents who have lost a child.

It is my hope to serve others by providing veterans with pragmatic resources that can ease their burdens. Beginning with my own story of recovery. I believe that God is big enough to love anything and everything that we might bring to Him.

For God paid the ultimate sacrifice in His son Jesus so that we might be redeemed by His Grace.

Messages that changed my life!

Why I am a Christian

Life as a Christian

Road Out of Hell

We invite you visit our store
All sales support RinC
Art4PTSD.org ==>